Mitoyotsuru is located in Mitoyo City in Kagawa Prefecture. As a sake brewery, Mitoyotsuru was founded in 1877 and had been operating until 2005. The sake was made by a team of brewers led by a master brewer, known as a “Toji” -- the origin of our name. Mitoyotsuru TOJI has been reborn and designed as a brewery experience guesthouse: A place where you can immerse yourself in the atmosphere of a traditional sake brewery, exactly as it was. The rooms where the brewers themselves had rested while practicing their craft are now renovated and revived for your enjoyment.

Although it is called a “brewery experience guesthouse”, MitoyotsuruTOJI is no longer a functioning sake brewing facility. What we offer is the chance to reinvigorate and refresh yourself in our unique brewing environment. We want you to experience the process of starting from the raw self coming just out of the rice fields to be turned into a delicious fresh sake. By going through the sake brewing process from a different perspective, your imagination can be activated and a fresh perspective gained on everything! This process is for you to refresh and enjoy. As our facility can hold up to 11 people, it is possible to share the fun with friends or multiple families, or as company training or other group events. We hope you will enjoy this truly unique brewing experience that only Mitoyotsuru TOJI can offer. 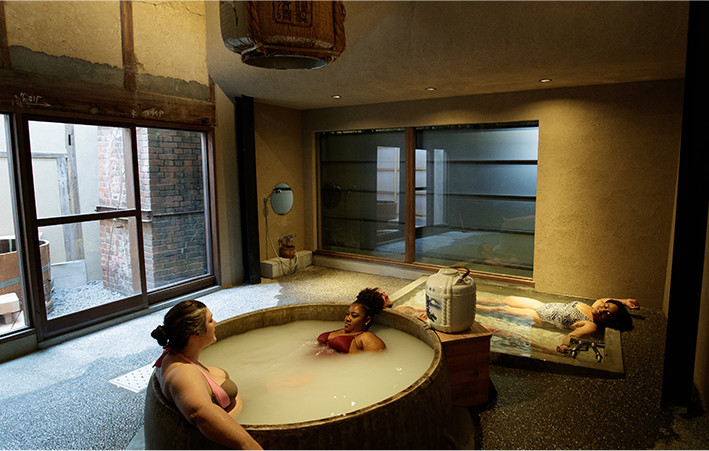 How to enjoy
Mitoyotsuru TOJI

Have your say / Guest testimonials

*Plans with a BBQ set are also available.

BBQ
The BBQ and BBQ space can be used freely. If you would like to, charcoal, starter fluid, and longs are available for a fee (3000 yen plus tax).
＜BBQ Ingredients＞
Please feel free to bring any ingredients you like for the BBQ. Alternatively, a BBQ set can be reserved for an additional cost (to be collected from our partner supermarket).

Address
5444 Takuma, Takuma-Chō, Mitoyo City,Kagawa Prefecture 769-1101 Japan
Travel by car
From Takamatsu Expressway: about 20 minutes from either Mitoyo-Tossaka IC or Sanuki Toyonaka IC.
From Chichibugahama: about 11 minutes by car or taxi.
Please enter our address or “Suda Port” if you are using GPS.